Natasha Sajé is a professor of English at Westminster College in Salt Lake City where she also curates the Anne Newman Sutton Weeks Poetry Series. In addition, Sajé is a member of the poetry faculty at the Vermont College of Fine Arts M.F.A. in Writing Program.

She is the author of three books of poems, a book of poetry criticism, and a memoir-in-essays. Her work has been honored with the Robert Winner and Alice Fay di Castagnola Awards, a Fulbright fellowship, the Campbell Corner Poetry Prize, and the Utah Book Award. Terroir: Love, Out of Place  was a finalist for Pen, Lambda, CMLP, and Indie Book Awards, and was awarded first prizes for the essay by Foreword Reviews and IPPY/ebook.

The word “terroir” refers to the climate and soil in which something is grown. Natasha Sajé applies this idea to the environments that nurture and challenge us, exploring in particular how the immigrant experience has shaped her identity. She revisits people and literature across her life, including her experiences as the child of European refugees in suburban New Jersey, taken under the wing of a widowed neighbor; a winter spent waitressing in Switzerland; her marriage to a Jamaican man in Baltimore; and finally her marriage to a woman in Salt Lake City.
This memoir-in-essays combines poetic lyricism with incisive commentary on nationality, race, ethnicity, gender, sexual orientation, and class. Reminding us that change is constant in our lives, Sajé asks how terroir creates identity. Throughout, the English language is her most fertile ground. 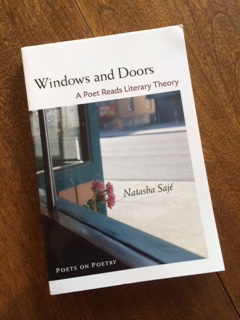 Windows and Doors is a poetry handbook unlike any other. It places poststructuralist and postmodern ways of thinking alongside the formalist, making explicit what is usually tacit. Each of the nine essays addresses a topic of central concern to readers and writers of poetry at the same time that it makes an argument about poetic language and ideology. The foundational topics of diction, syntax, rhythm, surprise, figurative language, narrative, genre, book design, and performance are explained through the lenses of theory, history, and philosophy—and illuminated through vibrant examples from contemporary U.S. poetry.

Windows and Doors builds its readers’ knowledge of poetry from the ground up. Beginning with a poem’s word choice and moving through discussions of syntax, rhythm, metaphor, and even its place within a book-length manuscript, Natasha Sajé’s lucid essays examine how poetic meaning is shaped. Sajé’s is a book for the erudite reader as well as the novice poet; her knowledge of both literary theory and the contemporary American scene crosses every aesthetic camp line currently imaginable. Indeed, just as Windows and Doors highlights those strategies working across “oppositional” aesthetic lines, Sajé’s book serves as a bridge between the theoretical and the practical, breaking down whatever critical/creative divisions remain in poetic scholarship. At times provocative, at times disarming, these essays continually surprise, willing to combine Kristeva’s take on Lacan with the origin of the word “abracadabra,” providing a magical quality to Sajé’s thought that serves these essays’ intention well, delighting as well as educating the reader, building a bridge between poetry and prose.
– Paisley Rekdal

Poets and theorists of literature alike obsess over language, its seductions and cruelties, powers and failures, parts and wholes, its clumsy perfection. You’d think poets would be eager to hear what their fellow fanatics have to say, but this is sometimes not the case. In these lively and insightful essays, Natasha Sajé is as thoughtful reading Foucault, Jakobson, or Lacan as she is reading Brock-Broido, Komunyakaa, or Ruefle, and she demonstrates with wit and grace just how much writers and readers of poetry stand to gain by thinking through theory.
– Joel Brouwer

The long-awaited third collection of poems from Natasha Saje is Vivarium.. A vivarium is an enclosure for living things—plants or animals—which might likewise be said of a poem. With a vivacious sensibility and unruly leaps from elegiac to ironic, Sajé’s new book is an abecedarium, fully using the page and challenging all manner of received wisdom.

In her new book of poems, Vivarium, Natasha Sajé, one of poetry’s most ludic and encyclopedic essayists, explores language—and the alphabet—in terms both acerbic and lush, exposing the roots of the world’s ills, and its many rooted pleasures. In a word, zowie!
– Mary Ruefle

Resourceful, restless, witty and substantially intelligent—what a rare combination of erudition and nimbleness this group of poems exhibits. Their range is marvelously wide in both form and tone; lists, riddles, prose poems, musical whimseys, something of a sonnet, biographical narrations, improvisational romps and interrogations, and careful meditations. Sometimes a single poem will swerve between what would seem to be contrary impulses so the dire and the playful often find themselves rubbing against each other, commingly. “E” quite dexterously narrates a scary event recalled from childhood while puncturing itself with some rather arcane e-words and their definitions creating a conversation between mind and body. “H” begins “O how we hanky pany/scarun” and ends “If the world can’t call our hurly burly hunky/dory, let it hara-kiri if it dares.” in a giddy, all-out topsy-turvy defense of sexual play; jouissance indeed. But there is also a profound sobriety and seriousness, one so true it welcomes at times buoyancy. Each poem surprised me, taught me something, delighted and illuminated and stretched.
– Dean Young

Any manuscript whose title sends me to the dictionary (and not just one—multiple dictionaries, not all of them in English) has at least one hook in me; and as I read this manuscript a good number of times over the course of several weeks, that hook, and many others, were set beyond escaping. . . . What captured me in this [“abecedarius”] manuscript was both the variety of poetic strategies used to elaborate a given letter, from a list of declarative sentences all beginning “I was . . .”, to a prose poem about boars which included anatomy, natural history, literary reference, and a recipe; from the playful “H” with its “Hanky Panky Harum” and headlong no-holds barred associative alliteration, to the poignant “M”, a delineation of a difficult relationship with a Mother, poems of love and praise, the final “Z” a boxed footnote, a simple list, perhaps, of as many z-words as the poet could think of—back to childhood again, the sort of showing off part, the running out of it part—in each poem I learned something new: fact knowledge and craft knowledge and heart knowledge.
– B. J. Buckley

This is a quietly smart, thoughtful and even mischievous poetry collection, and one that manages to end up in the most unexpected and playful places . . . Read the full review.
– Rob McLennan

Sajé actually takes the reader back to his or her most basic understanding of language and gives that understanding a violent and welcomed push . . . Read the full review.
– Sarah Dravec

The poems in Bend, Natasha Sajé’s sensuous second collection, range from pure lyric to prose narrative, with everything in between. Reading a restaurant menu reminds us “what hasn’t been offered” and reading novels leads the poet deeper into the “thickly wooded country” where a rose is a rat’s tail. If the horizon looks straight, this poet tells us that looks are deceiving, and also that books are a bank where one’s investment can grow. Bend is filled with other writers—including such unlikely roommates as Stephen Crane and Michael Foucault—used by the poet to question gender and power, the real and the imagined, the body and landscape.

[Bend] . . . divulges the spirit of a sensualist and the habits of a contemplative; sometimes vice versa. Colors are separated with the veracity of paint. Shifts in temperature are registered and background noises distinguished, not only for texture’s sake but for their essential contribution to the poem’s substance. Fine foods are sung and individual words lit. For company, Sajé summons a curious assortment of lettered forbears including Cotton Mather, Henry Vaughn, Nietzsche, Proust, Gertrude Stein, and Mary Shelley. A virtuous and subtly depraved book is Bend.
– C.D. Wright

The language of Sajé’s poems dares the world to be delightful and I’m delighted to see it rise to the challenge. Guillevic once hoped that poetry would ‘do to things what light does to them,’ and Sajé’s poems do just that, waking up the plants, pleating the landscape like an accordion, giving fruits their Zurbaran-like precision in bowls of perfect sunlight. There is also the sure-footed gliding into the absence of light for an occasional raid of revenge into the past. Sajé’s light–language reflects and shocks the objects it considers before they know what touched them. A second reading is inevitable.
– Andrei Codrescu

These are unusual, challenging poems, finely honed, often wry even sardonic. In “Thanksgiving,” Sajé ‘thank[s] God/ for Sloth, the bear who eats my hours/ so avidly. How difficult life would be/ without you, Sloth, an uphill road of industry.’ Every page the reader turns holds surprises by this talented poet with a heart full of stories.
– Maxine Kumin

Red Under the Skin

Natasha Sajé’s first book of poems, Red Under the Skin (Pittsburgh, 1994), was chosen from among more than 900 manuscripts to win the Agnes Lynch Starrett Prize and was later awarded the Towson State Prize in Literature. Published during the breakup of the former Yugoslavia, the title poem asks questions about nationality and identity. But the book as a whole also asks larger questions about identity, language, gender and sexual orientation: “How are we written upon?” and “What can we do about it?”

Wit and learning and brilliance of phrase are the common currency of Natasha Sajé’s first book of poems, poems that are thorough, even relentless in their pursuit. . . .Her touch is as sure as it is complete. She never allows the lyric to pale the dark narrative line not the interest in the story to distract the ironic music.
– Stanley Plumly

Intelligence flashes, winks, gleams and dances everywhere in this book, along with human compassion, full and precise sensuousness, an acknowledgment of appetite, and a knowledge of history.
– Alicia Ostriker