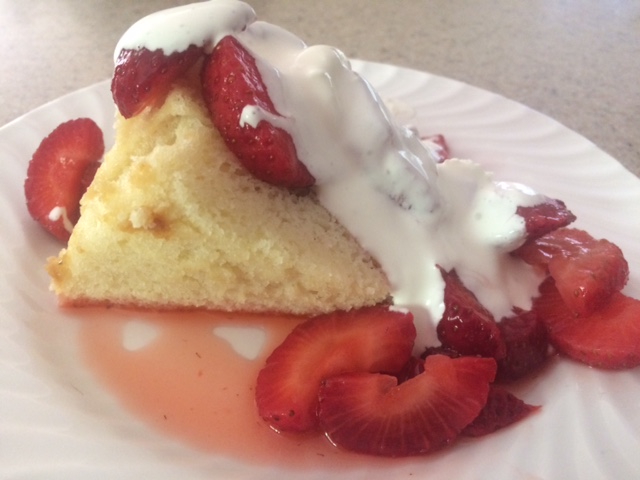 The problem with strawberry shortcake—call me on this if you like—is the biscuit base. No matter how buttery and/or flaky, it’s still mostly white flour. In my view, delicate fresh strawberries are burdened by the dense and stodgy biscuit, with the flowery berries demoted to a topping rather than the point. Granted, I’m the person who savors every bit of the fruit and cream and takes only one bite of the biscuit. Previously, my version of strawberry cake was genoise layers, filled with sliced strawberries in their own syrup and frosted with lightly sweetened stabilized (by cooking a bit of the cream with cornstarch) whipped cream. That cake has the texture—light, meltingly soft, spongy—of my dreams. But this month, we’re doing distance dining in our backyard with one or two other people, and it seemed silly to bake and assemble a layer cake only to keep it unseen in the kitchen. Moreover, genoise, which uses whole eggs, seemed somehow too yellow, too rich, for the blank canvas I was dreaming of. I gradually realized that a chiffon cake would make a perfect base for fresh strawberries and cream. I wanted to use almond flour, and once that thought lodged, I thought it would be silly not to also make the cake gluten-free.

I love egg whites, because of their protein nutritive value (I remember reading that Martha Stewart’s diet consisted mostly of hard-boiled egg whites), and because they become something else entirely when air is whipped into them, a blank canvas. My favorite cakes use whipped egg whites as leavening. (I use the leftover yolks in brioche and stollen dough and in custards.) Angel food cakes seem cloyingly sweet to me, while chiffon cakes have the same lightness and a more moist texture. According to most sources, the chiffon cake is an American invention of the 1920s by an insurance agent named Harry Baker. Its genius lies in the combination of whipped egg whites plus baking powder for leavening.

So here’s an almond chiffon cake, whose (please cut them big) wedges make a wonderful base for fresh, sliced strawberries and softly whipped or drizzled heavy cream. The faint almond taste adds interest but does not destroy the “blank canvas” of the cake. Like a trifle but in no sense a leftover, and not at all messy, this cake needs no alcohol to revive it. If you do have raspberry eau de vie or kirsch on hand, you could add a splash of that to the sliced berries and sugar. Or just a squeeze of lemon juice. You could, of course, use other berries or sliced fruit—any stone fruit would be lovely with the almond flavor. This is the cake I’m going to bake all summer long.

8 ounces sugar (whirred in a food processor or blender until superfine), divided in half

Heat oven to 325 degrees and place one rack in middle.

You’ll need three bowls, plus a stand mixer and its bowl, and an ungreased angel food or tube cake pan.

Whisk together almond flour and starches, baking powder, salt, and half the sugar. Set aside.

Whip 10 egg whites until foamy, add cream of tartar, and whip until soft peaks, then gradually add half the sugar and continue beating until stiff peaks form. Dump the stiffly beaten egg whites into a large bowl (11 quart).

Into the mixer bowl (without washing) dump the flour mix and the oil/milk mix and beat about one minute or until very smooth.

Take about two cups of the beaten egg whites and fold it into the oil/flour/yolk mixture to lighten. Then fold the rest of the mixtures together in the largest bowl.

Pour into an ungreased angel food (or large tube) pan and bake for 55 minutes or until a cake tester comes out clean. Turn pan upside down onto a cup or bottle (if the pan does not have feet, or even if it does) to cool at least two hours.

Once the cake is completely cool, use a long, thin sharp knife and a metal skewer to dislodge the bottom and sides and around the core. I use a paper clip that I have straightened out for the core (the same device I use to test if the cake is done). Invert on a greased wire rack and reinvert onto a serving plate or cake keeper. One point about the crust: it gets gummy, like a genoise crust, and detracts from the pure sponge texture. I cut off a thin layer of the cake top and bottom before serving, and I’m glad I did; the result is cleaner and more attractive. The cake lasts in the refrigerator for over a week, and at room temperature for a few days.

This site uses Akismet to reduce spam. Learn how your comment data is processed.